That’s why we’re packing the MLA Annual Convention with things you can’t get anywhere else—to make it worth your while to come, learn, and connect. We’re increasing the professional development opportunities for people at every stage of their careers, and we’re encouraging connections between fields that might never connect in other venues.

Here’s a quick sketch of three sessions I attended this year, sessions that couldn’t have happened anywhere else. 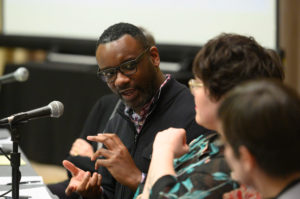 Readers (and Fans) Write Back to Books
Photo by Edward Savaria, Jr.

First, I moderated a session that was open to the public and focused on fan culture and reader communities. It brought together a venerable scholar in the field who shared her work on ’90s girls’ zines, a mid-career scholar who works on the Harlem Renaissance, and an early-career scholar whose work on podcasts is pushing the field to reexamine peer-review practices. Chatter afterward was all about the rich overlaps among the three presentations, even though none of the presenters had previously met.

Next, I went to the Humanities in Five sessions. Anne Ruggles Gere, the 2018 president of the MLA, encouraged us as humanists to make clear the substance and value of our work to folks outside higher education. She put together two sessions that asked scholars to present their research to a public audience in a strictly timed, five-minute format. One session even had judges, from the Chicago media scene. The press was excited about the presentations, and so was the audience—excited about taking our work outside our own walls to show why the humanities matter.

The final session I attended was in my field. The session featured lightning talks on the state of Victorian studies in relation to critical race theory. Not all the presenters were purely Victorianists, so they might not have attended a Victorian studies conference; the MLA was an opportunity to bring them together. The panelists gave original yet overlapping presentations that pumped up the audience and each other. I left the room thrilled about the future of Victorian studies.

Another significant thing that happened at the convention: the Delegate Assembly, the roughly three-hundred-person body that represents you in the governance structure of the association, tackled the issue of graduate student advising and mentoring. It reached out to members before the convention to collect lists of concerns and presented those at the assembly. Then the Delegate Assembly Organizing Committee broke the huge assembly into small groups (small groups!) and had them tackle a list of questions designed to lead to recommendations for action by the association to improve the conditions of graduate study in our disciplines.

And it worked. Delegates shared good stories and bad and made recommendations for policy and guidelines. People left the Delegate Assembly having had discussions and made connections they’d never had or made before at the convention. As a result, the association is creating new guidelines for graduate advising.

The MLA Annual Convention brings together researchers and teachers in your field with those from all other fields in languages and literature, writing studies, and cultural studies. Its attendees help determine the direction of the entire profession. Come to Seattle next year. And to as many MLA conventions as you can. We promise to make it worthwhile for you.

The blog features columns from the MLA Newsletter, resources on the academic workforce and graduate education, and posts about other items of interest to MLA members.

This site is part of the MLA network on Humanities Commons. Explore other sites on this network or register to build your own.
Terms of ServicePrivacy PolicyGuidelines for Participation
Skip to toolbar