“Why did you stay away from Guatemala for forty years?” “Why did you decide to return now?” These are questions that friends, family members, and colleagues asked me in the weeks preceding my travel back to the country where I completed the final year of the bachillerato. In truth, I had always intended to revisit the people and places that meant so much to me when I was a teenager. But the seemingly endless military and paramilitary conflicts of the late seventies, eighties, and early nineties served as a major deterrent to returning.

I studied and taught Guatemalan literature and culture, and I did not want to go while the political situation was atrocious. Every time I read about a massacre or saw footage of villages being razed, I felt a combination of horror, fear, and sorrow. Granted, the likelihood of my experiencing violence was low, but I could not overcome the gut reaction that told me to stay away.

As it happens, after I graduated from the Instituto Belga Guatemalteco, I shifted my linguistic alliances to the Spanish spoken in Spain. I studied in Madrid for one college semester, and I have returned to Spain annually, with a few exceptions. How could I have ever imagined that family trips to the northwest region of Spain (Galicia) would keep me distant from la tierra chapina of my youth and that I would trade in cuadras for manzanas, boletos for billetes, and camionetas for autobuses?

So why would I visit Guatemala now, sixteen years after the historic peace accords that put an official (but not complete) end to state-sponsored violence? In a word: Facebook. My Guatemalan school has a page, where I found several of my good friends. Finding them gave me a tangible reason to travel back. I planned most of the trip to take place away from the capital city, despite my having lived there for eleven of the twelve months I resided in Guatemala. I wanted to see the country as the tourist I know myself to be today. In Antigua, the colonial capital destroyed by earthquakes, I rediscovered what I had glimpsed on a day trip in 1972, but it is now a UNESCO World Heritage Site transformed into a lively destination for language learners, community volunteers, and wealthy Guatemala City dwellers with second homes.

The spoken Spanish was more standard than I remembered, so I was grateful when familiar regionalisms cropped up. I heard some expressions I may never have known in the first place: when I was asked if I wanted to “cancelar” at the hotel, I reacted with surprise, since I was checking out (it means “to pay your bill”). I was touched to hear the age-old lines of the women inviting me to buy their wares: “No he vendido nada hoy.” “Aunque solo sea para el autobus.” (“I’ve sold nothing today.” “Even if it’s just to cover my bus fare.”) Most of all, I felt the soul-rattling of the familiar rendered foreign, of things remembered as if dissipated into the clouds shrouding the volcano Agua that towers over Antigua to the south. This was the country of my second birth, and it had been lost to me. On the ruins of Antigua I stand, with surprising calm and contentment, mentally putting together the pieces of my life.

The driver who took me from the airport to Antigua talked about a woman who sells the town’s best tamales on Saturday evening near the church of La Merced. The plaza by the church was filled with food stands of all kinds, but the tamal vendor was a few blocks away (everyone knew where when asked). The old indigenous woman had special holiday tamales that smelled amazing. The only problem was I didn’t yet have quetzales, the national currency. “Acepta dólares?” I asked. She didn’t answer right away: there was some consultation with the younger woman who was helping. I named my desired exchange rate, and the transaction began. A twenty dollar bill became 150 quetzales, and 30 quetzales bought the tamales to be enjoyed with a fresh-squeezed limonada (made of limes) back at the hotel. I tipped her. I later found out she had added a quetzal or two to the price of the tamales, a custom in the country whereby locals pay one price and tourists pay more (this happened on boat rides across Lake Atitlán). It’s how poor Guatemalans survive in a brutal economic and social system. The entire exchange with the seller could not have happened if I didn’t know Guatemalan Spanish: the language, the customs, the food. But it also wouldn’t have transpired in the way it did had I not been a dollar-toting foreigner, aware of her place in a globalized Guatemala where indigenous women carry food in baskets on their heads while chatting on cell phones. Nothing unheimlich about it.

Every tourist who goes to Guatemala knows about Lake Atitlán, the volcano-surrounded paradise dotted with indigenous villages; I had spent several holidays there forty years ago.  In the past decade, Lake Atitlán has suffered some horrific effects of natural and man-made disasters: Hurricane Stan (2005), which caused mudslides that killed nearly 1,500 people, and Tropical Storm Agatha (2010), which produced a destructive rise in water levels. Untreated sewage and runoff from fertilizers have turned parts of Lake Atitlán into a blue-green algae swamp. Approaching villages by ferry, I saw half-submerged homes that wealth built but couldn’t save. Also visible were the tops of restaurants, community centers, and other service buildings. The depths of the lake harbor another submerged world: beneath thousands of years of sediment lie the ruins of a Mayan site destroyed around 250 AD by rising waters.  It’s no wonder that locals call Lake Atitlán “el ombligo del mundo” (“the navel of the world”). It rises and falls with the earth’s gentle and violent movements.

Santiago Atitlán, the site of infamous assassinations and massacres during the years of armed conflict, now appears as a town bustling with its food and craft markets and with the cult of Maximón, a syncretic Mayan-Christian folk saint. Little children offer to take tourists to the place where he is venerated; the effigy of Maximón smokes and drinks, with assistance from the men representing the brotherhoods that watch over him. When I paid my tribute (in quetzales), I was allowed to observe the prostrated man praying in Tz’utujil before Maximón. This vision, amid flashing Christmas lights and statues of the Virgin of Guadalupe, Jesus, and sundry saints, was unlike any I’d ever seen. I quickly took familiar refuge in the Catholic church down the road, where women knelt in rapt devotion to an image of Christ on the cross.

In Guatemala City, I encountered the most familiar sights I was to see on this trip: my school and the neighborhood surrounding it, as well as the most familiar faces—those of my former classmates. Walking through the old wooden door to the Instituto Belga Guatemalteco, I stopped in the patio, where an indigenous woman was scrubbing the floor, as if forty years had not passed. Next door to my school stood the same little snack shop with the homemade sweets I used to love: dulce de leche canillas and cuadritos. (I bought some to take home, but they quickly fossilized. So much for the madeleine.)

At lunch that day, I met up with seven of my classmates from the Instituto Belga. Like most reunions, this one was punctuated with “You haven’t changed a bit” and “Really? How could you have a thirty-year-old daughter!” My classmates gently teased me about my Spanish (of Spain) accent, exaggerating the “sh” sound in the word español, while also congratulating me on having kept up my bilingualism. We passed around pictures, and I asked everyone to have another go at signing the autograph book in which they’d written something to me back in 1972. This reunion was sweetly familiar, and it’s when, on my last full day in Guatemala, I felt truly at home.

The one sight I found uncanny in the capital city was the twelve pillars outside the Metropolitan Cathedral. Inscribed on them are the names of those who were disappeared, tortured, massacred, and assassinated during the decades of what is often called a civil war (but more appropriately named, as it was in Argentina, a dirty war). Having just seen a photography exhibit in Antigua that featured images such as one with women weeping before an unearthed mass grave (photo four) in the vicinity of Santiago Atitlán, I had these recent historical events on my mind. According to Amnesty International, some 200,000 civilian lives were lost. Organized by departments (the geopolitical divisions of the country), the alphabetized lists read like a history of the Spanish viceroyalty: Castilian names, indigenous names, hybrid names like Canil Mendoza. From the highland department of Quiché come the Menchú family names. Towering above one pillar is the name of Bishop Juan José Gerardi Conedera, beaten to death two years after the peace accords were signed. (For more on the bishop’s murder, read Francisco Goldman’s The Art of Political Murder [New York: Grove, 2008]).

I used to come to this cathedral often, since it’s only two blocks from my former school. Standing near these engraved pillars, having just seen the sculpture commemorating the peace accords in the National Palace next door, I felt a sense of hope for Guatemala’s future. Then I remembered the name of the vast urban slum that dominates a central ravine in Guatemala City with its metal shacks and persistent, abysmal poverty and violence: La Limonada. “Is it still there?” I asked my driver on the way to the airport on the last day. “Yes,” he said, “bigger than ever.”  And still somehow they survive, I think, as I prepare to become a returnee once again. 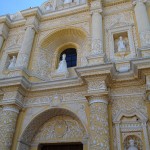 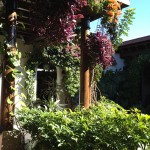 Patio at hotel in Antigua 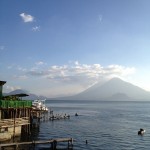 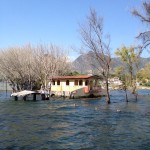 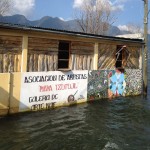 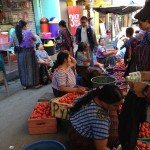 The market in Santiago Atitlán 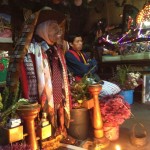 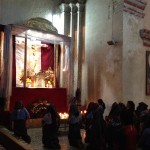 The church of Santiago Atitlán 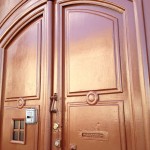 Door to the Instituto Belga Guatemalteco 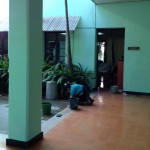 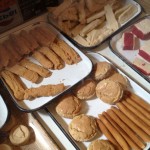 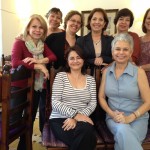 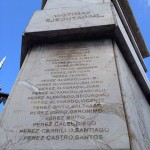 One of the twelve pillars, Metropolitan Cathedral, Guatemala City 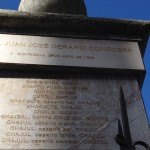 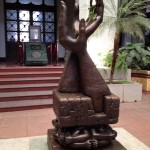 Here are the links to my three previous columns on my Guatemalan experiences:
Return of the Pensative Daughter: Survival English
http://www.mla.org/pdf/nl_431_print_web_no_links.pdf
MLA Newsletter, Spring 2011

De acuerdo, pero ya! Thank you, Rosemary, for sharing this with MLA readers. Especially the pillars of names and Francisco Goldman. How important for the wider membership to learn about this tiny yet important Latin American country. I hope this will translate to more sessions on Latin American topics at the next MLA, a key area that I perceived to be less represented than peninsular sessions at Boston.

Thank you, Ellen! One way to make sure there are more sessions focused on Latin America is for members to propose special sessions. You still have over a month to do so. Hope to see you in Chicago.

The blog features columns from the MLA Newsletter, resources on the academic workforce and graduate education, and posts about other items of interest to MLA members.

This site is part of the MLA network on Humanities Commons. Explore other sites on this network or register to build your own.
Terms of ServicePrivacy PolicyGuidelines for Participation
Skip to toolbar